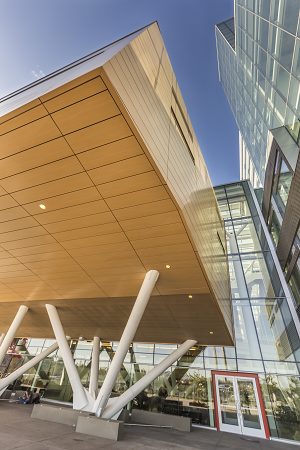 MCM consists of two skins of metal sandwiching a core material, which provides greater rigidity and superior flatness than sheet metal or plate.

The MCM Manufacturer is the one that makes sheets of MCM, in a process where the skins and core are fused together in a continuous coil process. There are also some manufacturers that press skins to a core one sheet at a time, however this is generally known to be a lower quality bond, which is important when you consider the harsh conditions an exterior building envelope is required to withstand.

The MCM Fabricator cuts, routs, folds and otherwise processes the MCM to fabricate panels to mount on the building. These fabricators can either have their own tested installation system using aluminum extrusions, or they can use a third party’s installation system.

So which one should I specify? The MCM Manufacturer or the Fabricator?

It is important then to clearly differentiate between the Manufacturer and the Fabricator in your specifications. A sample of specifications that make this clear can be found at https://www.fairviewarchitecturalusa.com/s/Vitrabond-FR-Specs-82015.docx

I hope this helps build a greater understanding in the Composite Metal Wall Panel industry!

Cart
There are no products in the cart!
0